Home » Meet 17-Year-Old African American Who is One of the Youngest Black Pilots in the U.S.

17-year-old African American, Christopher Ballinger made history as one of the youngest Black pilots in the United States of America after recently earning his pilot license. 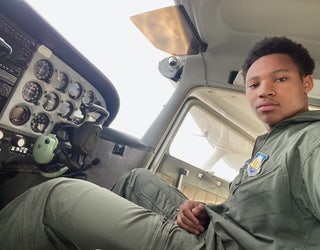 Christopher Ballinger loves flying and going to different places, he’s always loved doing that as kid. So when the opportunity comes knocking, he didn’t let it slide pass him. He joined the Air Force Junior ROTC Flight Academy Program and started his journey to becoming a pilot; even when he’s faced with a lot of challenges.

“I have had this interest for a while,” Christopher told ABC7. “This was something that was calling for me.” Christopher’s passion for flying finally paid of when he was selected as one of the hundreds out of the thousands that participated in the 8-week training.

As the saying goes, “nothing good comes cheap.” Christopher had to wake up every morning at 5 to take written and flying tests and practices. He did 55 hours of training flying around and finally completed his training the day he turned 17 – making him a licensed pilot in the United States of America. “I feel relieved that I actually did it,” he said.

Christopher’s dream is to join the Air Force and fly military planes someday. He’s currently a senior student at the Sidewall Friends School in Washington DC. The 17-year-old hope to inspire young people like him to go after their dreams even if it seems impossible and challenging.

“Look for any and all opportunities if one shows up take it because I promise you it will be worth it. Even if it doesn’t feel like it in the long run or maybe right after, you will see some results,” he said.