Richard Eyimofe Evans Mofe-Damijo (born 6 July 1961), popularly known as RMD, is a Nigerian actor, writer, producer, and lawyer. He is also a former Commissioner for Culture and Tourism in Delta State. In 2005 he won the Africa Movie Academy Award for Best Actor in a Leading Role. He has also received a Lifetime Achievement Award at the 12th Africa Movie Academy Awards in 2016.
Till date, RMD is regarded as being one of the top most iconic actors in Africa. He has starred in over 200 Nollywood movies, and doesn’t seem to stop anytime soon, as his career his still on. RMD’s earnings from movie roles and production, TV shows, politics and ambassadorial deals, has made him one of the richest and most influential actors in the history of Nigeria.
★ Profile
• Full name – Richard Eyimofe Evans Mofe-Damijo
• Birth date – 6th of July, 1961
• Birth place – Aladja, Delta State
• Age – 62 years old
• Nationality – Nigerian
• Marital status – Married (Jumobi Adegbesan)
• Children – 4
• Occupation – Actor, Filmmaker, Director, Politician, Lawyer and Writer
• Instagram followers – 2.5m
• Net worth – $5 million
• Years active (Acting) – 1980s-present
★ Early Life, Background & Education 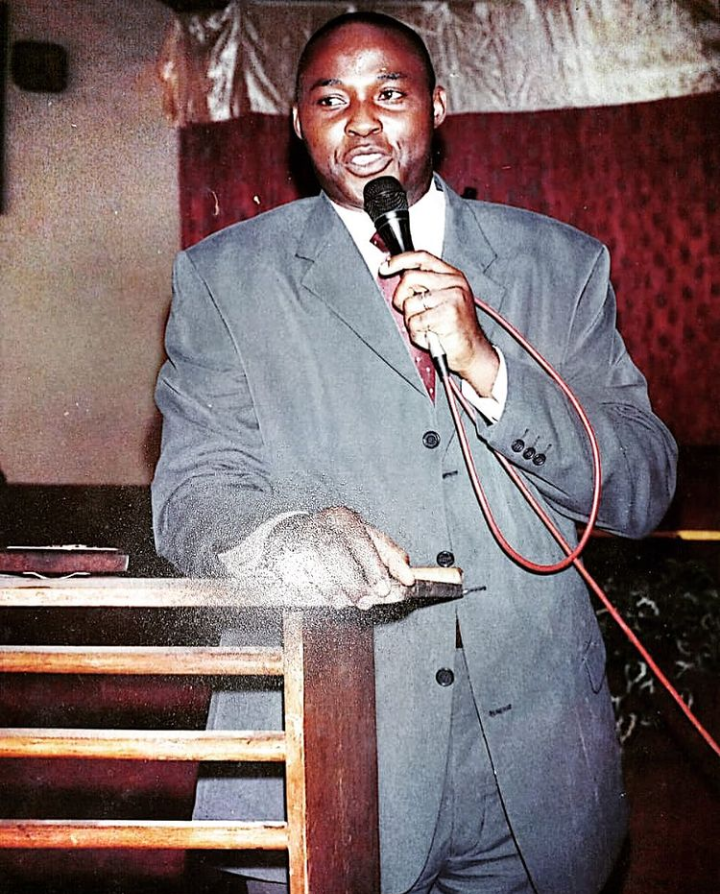 Mofe-Damijo was born in Aladja community of Udu Kingdom, Delta State. He attended Midwest College, Warri and Anglican Grammar School and was a member of the Drama Club. He furthered his education by enrolling into the University of Benin to continue his education and studied Theatre Arts. Later on in 1997, Mofe-Damijo returned to the university to obtain a degree in Law (which as at that time was one of his passion) at the University of Lagos, graduated in 2004 and was called to bar in 2005.
★ Career 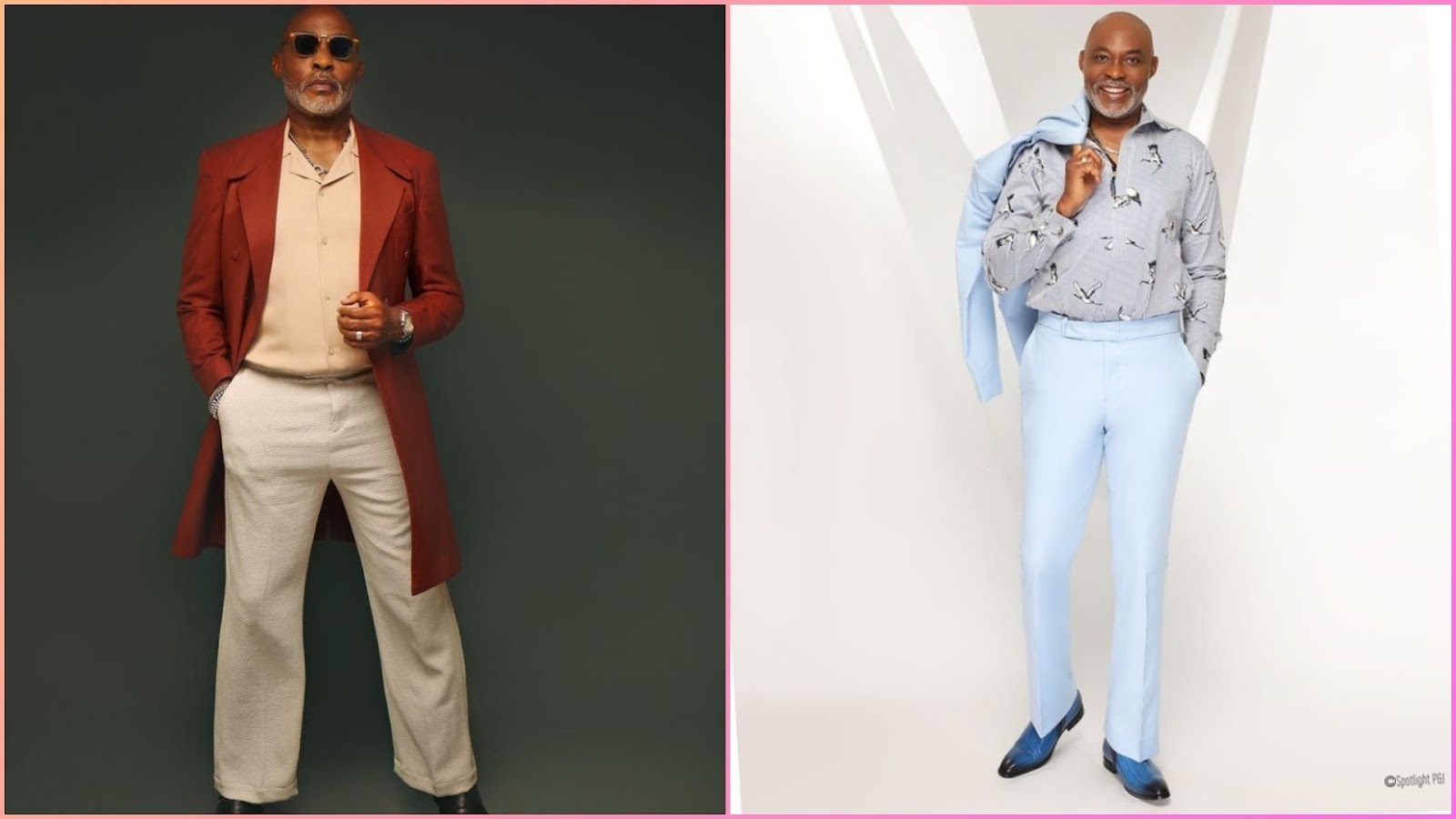 After graduating from the university, Mofe-Damijo took part in a television soap opera in the late 80’s titled “Ripples”. Before then, he had a stint with Concord Newspaper, Metro Magazine and The Guardian as a reporter and journalist. “Out of Bounds”was the first film for which he received a writer/producer credit.
★ Political Career
Mofe-Damijo was appointed as the Special Adviser of Culture and Tourism to the then Governor Emmanuel Uduaghan in 2008, then became the Commissioner for the Culture and Tourism of Delta State, Nigeria in 2009. His tenure ended in 2015. 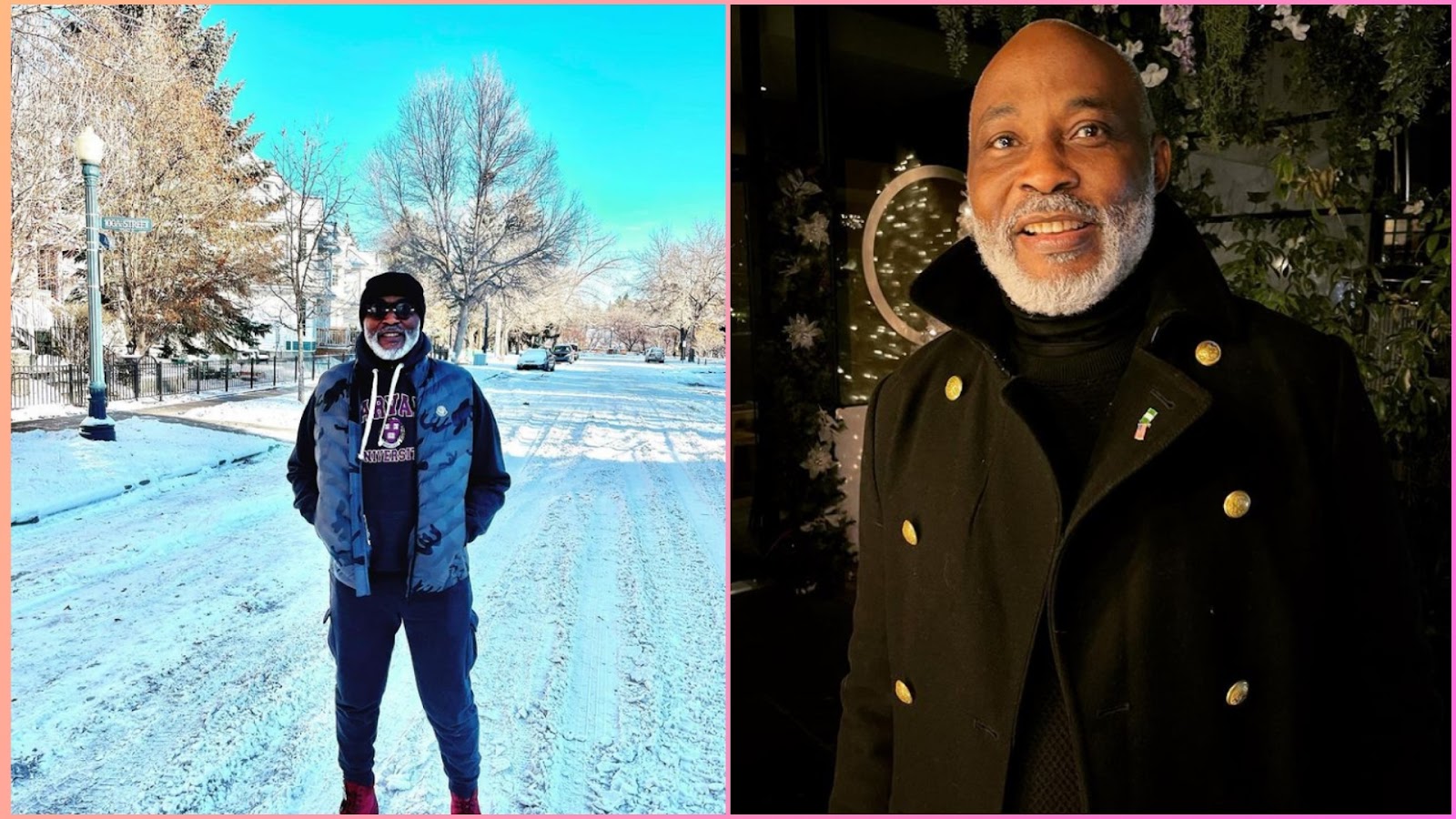 Fun fact: RMD was off-screen (away from acting and Nollywood) from 2007 to 2013. This came as a result of him being appointed as the Commissioner for Culture & Tourism in his state – Delta.
★ Personal Life
Mofe-Damijo was once married to Nigerian journalist/publisher, May Ellen-Ezekiel (MEE). After her death in 1996, Richard Mofe-Damijo remarried and tied the knot once more with TV personality – Jumobi Adegbesan, in the year 2000. Following their marriage, his wife (Jumobi) left the TV & Media to venture and explore the corporate world. 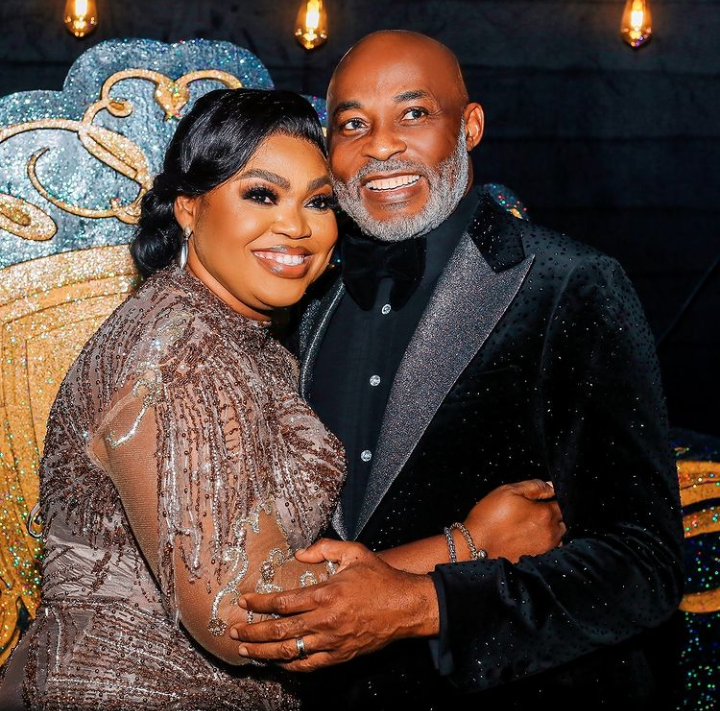 Mofe-Damijo currently has four children: two with his current wife and two from his previous marriage.
Fun fact: RMD used to be a Sunday School Teacher. He did that for about 13 to 14 years, before taking a break from it. According to RMD himself, he still does that whenever he’s free on Sunday.
★ Philanthropy
Not much is known about the philanthropic works of RMD, but he’s reported to have started a foundation in his own name “RMD Foundation” in support and help of charitable organizations. The organization was established as a result of RMD’s passion and commitment to helping the less privileged and seeing to their needs.
★ Popular Movies
Mofe-Damijo has starred in over 80 movies and television series both locally and internationally, below is a list of some of the interesting movies he has starred in:
• Out of Bounds (1997)
• Hostages (1997)
• Scores to Settle (1998)
• Diamond Ring (1998)
• Freedom (1999)
• When God Says Yes (2003)
• Love (2003)
• Keeping Faith: Is That Love (2003)
• Romantic Attraction (2003)
• The Intruder (2003)
• I Will Die For You (2003)
• Emotional Pain (2003)
• The Mayors (2004)
• True Romance (2004)
• The Legend (2004)
• I want Your Wife (2004)
• Indecent Act (2004)
• Engagement Night (2004)
• Critical Decision (2004)
• Burning Desire (2004)
• Critical Assignment (2004)
• The Bridesmaid (2005)
• Darkest Night (2005)
• Behind Closed Doors (2005)
• Welcome to Nollywood (2007)
• 30 Days in Atlanta (2014)
• Oloibiri (2015)
• Okafor’s Law (2016)
• Three Wise Men (2016)
• Dinner (2016)
• The Wedding Party (2016)
• The Grudge (2016)
• Hush (2016)
• I Love My Wife Even After Death (2017)
• 10 days in Sun City (2017)
• The Wedding Party 2 (2017)
• Boxing Day: A Day After Christmas (2017)
• My God never fail me (2018)
• Merry Men: The Real Yoruba Demons (2018)
• Cross Roads (2018)
• God Calling (2018)
• Chief Daddy (2018)
• Blood And Oil (2019)
• The Hour (2019)
• Castle And Castle (2019)
★ Awards & Recognitions
With a long list of highly successful films and TV shows RMD has starred in, he definitely deserves noteworthy awards, some of which he has bagged the below listed:
• Africa Movie Academy Awards – “Best Actor in a Leading Role” (2005)
• Best of Nollywood Awards – “Special Recognition Award” (2012)
• Africa Movie Academy Awards – “Lifetime Achievement Award” (2016)
• Africa Movie Academy Awards – “Overall Best Actor in a Leading Role” (2018)
★ Business Interests
The veteran actor is the founder of RMD Productions and White Water Limited.
RMD Productions is an umbrella for the rmdtvng and RMDTHEACTOR. It is an entertainment platform that produces creative content, television and radio productions, broadcasting e.t.c. It is the producer of the popular sitcom – Trying and Mr. X family. It also produced a kiddies show Bed time with Granpa, and talk/live shows Bridging the gap and Made in Warri.
White Water Limited on the other hand, is a Nigerian PR outfit that deals with public relations consultancy.
★ RMD Quotes
• “The thing about getting older is that with each passing day you know yourself better, find your voice more and generally become better aware.”
• “Two sides to a story does not invalidate the truth of the abused, the molested, the hurting. Do not be quick to rebut someone’s pain.”
• “Do not expect a rape story to make sense to you because when a predator strikes, the circumstances are not his first thoughts.”
• “If we remember that life is a journey and that every journey has a rest point, we will stop fighting with and getting discouraged by every lull we experience on our life’s journey.”
• “Just as we stop to refuel, eat or even stretch out during actual journeys, life sometimes stops us every now and then.”
• “Be what, where, who, and how you can be, but by all means, be real.”
• “Don’t enter into a relationship with the intent of giving nothing in return. You must be willing to service whatever relationship you have.”
• “Have respect, more for yourself than the one you latch onto because it is self-respect that restrains you from behaving in ways that put you in bad light.”
• “Never be afraid to pause sometimes to look at yourself in the mirror and ask if all is going well. If not, reappraise. Reassess. Reprogramme. Redirect. Redefine and Rev on.”
• “Finding fulfillment in the midst of the storm is a gift from God.”
• “Relax. Trust the process. It’s easier than you think. Smiling through it all, is all the mask you need to complete the journey.”
★ Net Worth 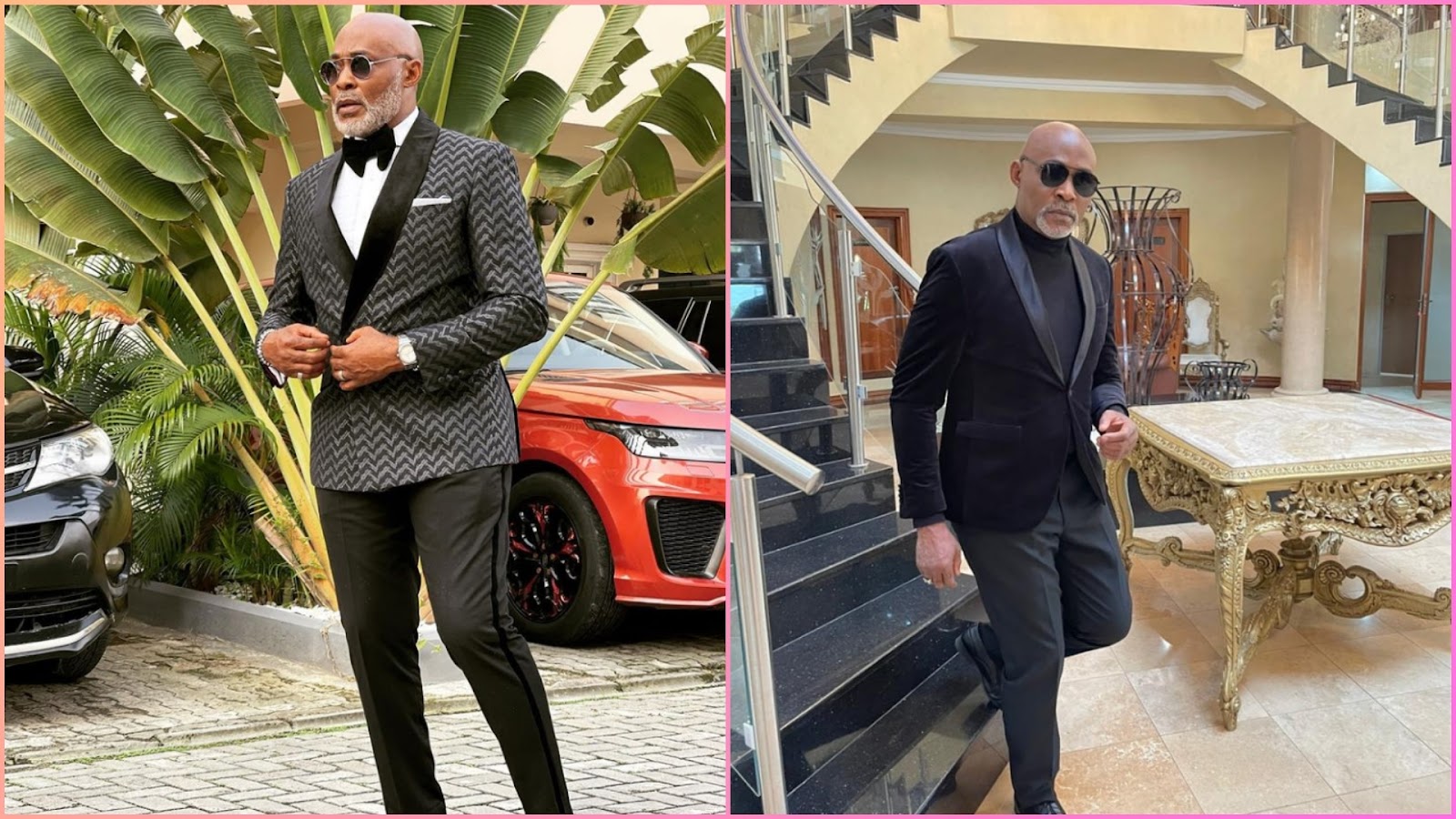 As of 2023, thanks to his earnings from his business interests, political career, acting career and brand endorsements, and ambassadorial deals, RMD is estimated to be worth a whopping $5 million and has made him rank among the top richest Nigerian Nollywood actors.
Well, there you have it. Make sure you check out our other blog posts for more information about the crypto market and trending entertainment headlines. Thanks for reading!