TikTok users are reacting to a video of an old woman who was using lipstick and admiring herself in a mirror.

The lovely old woman was seen making up in a video posted by a user identified as Destiny.

She carefully applied the lipstick on her lips but after reviewing it in the mirror, she let out a beautiful smile.

After watching herself in the mirror, it appears she remembered her youthful days and how glowing she use to be as compared to now. 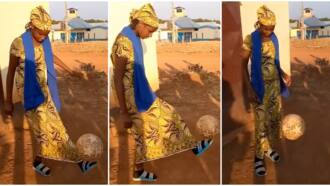 Video of an old woman applying make up sparks reactions

Also, her smiles in the video seems to have reminded young people that they will not remain young forever.

Young folks who have come across the video took to the comment section to say how beautiful the woman is despite her old age.

Watch the video below:

“The spirit is willing but the flesh.”

“In Uganda, I don’t know how to explain.”

“That’s where we are going ba pipo. Let’s respect age.”

“Queen of the queens.”

In a video which trended on TikTok, the woman was declared the oldest person in her Ekwere community.

In the video, her children, grandchildren and greatgrand children rallied around her.

Many Nigerians who saw the video were surprised that someone born in 1897 is still alive in 2022.

Many young people congratulated her and also tapped into her grace of old age.